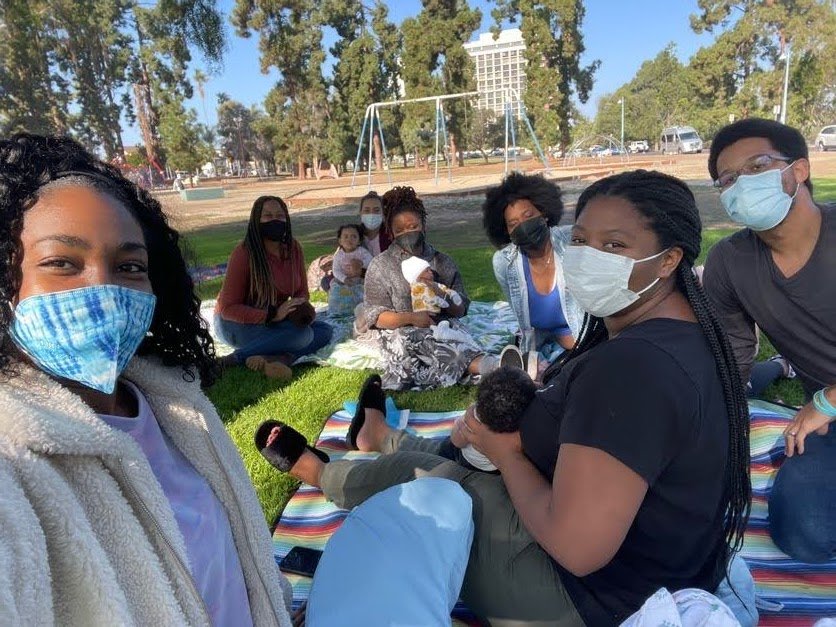 Food justice and chest/breastfeeding are inextricably linked. Institutionalized racism, and its many faces, has matriculated to prey on Black babies. First Food Justice is about infant feeding disparities in the first food system. In this sense, it highlights persistent barriers to chest/breastfeeding success in areas that are predominantly black folks, such as my hometown, Southeast San Diego. “First food deserts” are peppered throughout the United States, a term coined by the great Kimberly Seals Allers based on her research and community projects in Birmingham, AL,  Jackson, MS,  and New Orleans, LA. According to Seals Allers’ research, a first food desert is defined as a geographical area where social and economic dynamics unequally constrain breastfeeding when compared with other locations. The healthiest first food is human milk, which is proven to have the best health and survival outcomes for humans. We must acknowledge that Black infants are more often limited, at times stunted, and face systemic barriers by being in a first food unfriendly habitat, born into an inequitable food system. In Sears Allers’ book, The Big Letdown: How Medicine, Big Business, and Feminism Undermine Breastfeeding, it states “(a first food deserts exists when) A persistent and widespread lack of culturally relevant healthcare support, peer support, and public spaces that facilitate breastfeeding. Where you live and work, then, unequally impacts what you feed and how you eat.”

Southeast San Diego is a mid-size area of the county, that is predominantly African American, low income to upper middle class, and some military, and various Asian populations that began to increase in the 90’s, particularly in Paradise Hills. It is a significantly under-resourced area in the county with limited access to perinatal, reproductive and chest/breastfeeding support and that needs to change. I also have pinpointed the limited resources and access to first foods and chest/breastfeeding support in the neighborhood and surrounding areas where I grew up. From Solola apartments in the community of Logan Heights and the “four corners of life” to Skyline and Paradise Hills. Skyline is a hilly urban neighborhood in Southeastern San Diego. It is bordered by Encanto to the west, Jamacha–Lomita to the North East, and Bay Terraces to the South. None of these communities have easy access to chest/breastfeeding support. In these very areas, we tell parents to chest/breastfeed and expect them to be successful when we don’t even have the basic infrastructure in place to make that support possible. Everything is hyper-local, meaning you have to travel a far distance to get decent quality food and support. A person shouldn’t have to go far and wide to have access to nutrition that is most optimal to support a successful chest/breastfeeding journey.